David Madland is a senior fellow at the Center for American Progress. He has been called “one of the nation’s wisest” labor scholars by Washington Post columnist E.J. Dionne Jr. Mary Kay Henry, president of SEIU, says his work “is creating a North Star for how we increase workers' power in the economy and democracy.”

Madland is the author of Re-Union: How Bold Labor Reforms Can Repair, Revitalize, and Reunite the United States (Cornell University Press, 2021), which helped put sectoral bargaining on the political agenda, and Hollowed Out: Why the Economy Doesn’t Work without a Strong Middle Class (University of California Press, 2015), a pioneering critique of trickle-down economics which has helped policymakers understand that the economy grows from the middle out and the bottom up, not the top down.

He appears frequently on television including on PBS, CNN, MSNBC, and Fox and is a regular guest on radio talk shows across the United States. His work has been cited in numerous publications, including The New York Times, The Wall Street Journal, The Washington Post, and The New Yorker. He has testified before Congress as well as several state legislatures.

Madland received his doctorate in government from Georgetown University and his bachelor’s degree from the University of California, Berkeley. His research about the decline of the U.S. pension system received the “Best Dissertation Award” from the Labor and Employment Relations Association.  Madland previously worked on economic policy for Rep. George Miller (D-CA). 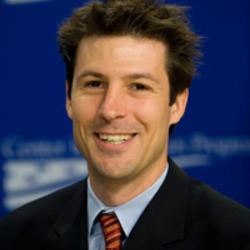