​​​​ In Re-Union, David Madland explores how labor unions are essential to all workers. Yet, union systems are badly flawed and in need of rapid changes for reform. Madland's multilayered analysis presents a solution—a model to replace the existing firm-based collective bargaining with a larger, industry-scale bargaining method coupled with powerful incentives for union membership.

These changes would represent a remarkable shift from the norm, but would be based on lessons from other countries, U.S. history and current policy in several cities and states. In outlining the shift, Madland details how these proposals might mend the broken economic and political systems in the United States. He also uses three examples from Britain, Canada, and Australia to explore what there is yet to learn about this new system in other developed nations.

Madland's practical advice in Re-Union extends to a proposal for how to implement the changes necessary to shift the current paradigm. This powerful call to action speaks directly to the workers affected by these policies—the very people seeking to have their voices recognized in a system that attempts to silence them.

How Bold Labor Reforms Can Repair, Revitalize, and Reunite the United States 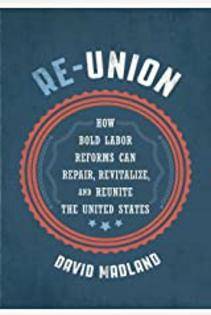 "For all who care about pushing back against rising inequality and enhancing the lives of all workers—including the long-forgotten whom we now recognize as 'essential'—Re-Union is this moment's necessary book. David Madland offers an exciting plan that honors the traditional role of unions while also proposing innovative steps to broaden how unions bargain and how they can serve the interests of workers outside their organizations. Drawing on policies successfully pursued in other democracies, Madland is both visionary and resolutely practical. We need laws to make it easier for workers to join unions, he writes, and unions need to take on the tasks that will, in turn, attract the members they need. May leaders in government, the labor movement—and, yes, visionary business people—pay attention to this important and engaging book. Madland shows how the great achievements of organized labor's past can be brought to life again in the 21st Century."

"Policymakers are increasingly interested in ideas to raise wages and to improve the pre-tax distribution of income. While a strong minimum wage can play an important part, when it comes to workers in the middle of the distribution, we need new tools. David Madland makes a compelling case that a unions and collective bargaining play key parts in this story. Madland provides an informative review of labor law history and components in America and abroad. He couples this with a powerful set of recommendations to re-make American labor law, highlighting the importance of sector and higher-level bargaining, and policy levers to incentivize workers to become union members. This is a must read for scholars, policy makers, and all those who are interested in a more equitable and fair labor market in this country."

"David Madland understands that strengthening workers will strengthen our economy and our democracy, and proposes bold solutions to reimagine how labor law can give working people a real chance to build lasting power through solidarity."

Sara Nelson, International President of the Association of Flight Attendants-CWA

"Re-Union charts the path forward for labor policy that reigns in unchecked corporate power over working peoples' lives in America. It shows how bold changes that promote sectoral bargaining and provide incentives for union membership would ensure workers in today's economy are paid family-sustaining wages and benefits, promote equality, and strengthen our democracy. Madland has done a great service to American workers by showing how to unrig the rules so working people can bargain for a better life."

"Re-Union is a wonderfully conceived, researched, and argued book. David Madland has produced a genuinely impressive up-to-the moment manual on the past, comparative, and present trajectory of US labor unions and policies."